10 Spanish Board Games For Kids 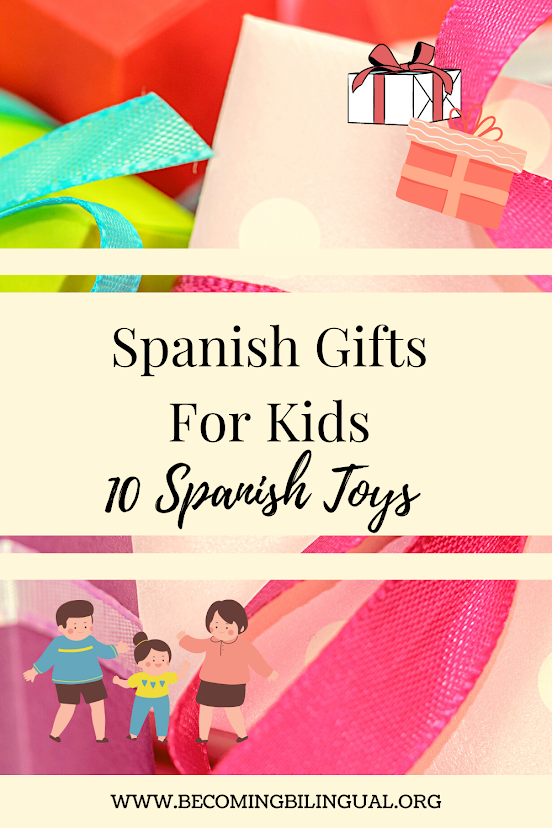 As a non-native Spanish speaker, I’m always looking for more ways to incorporate Spanish into our day. Since I come from a board game loving family, it only seems natural that I’d be looking for games in Spanish to share with my daughter!

For Spanish toys and games for babies, check out this article here:

Playing board games is a natural way to use language because you’re having a conversation around a common talking point. There are often phrase that are used repeatedly when playing board games, allowing you to use and memorize these phrases in context, “tu turno!” (your turn) or “lanza el dado!” (throw the dice!)

Board games include a lot of picture support which is ideal for building vocabulary. When you’re looking at a picture of something and then talking about it out loud, you’re more likely to remember the vocabulary.

Some of the games that I’m sharing today are actually in Spanish. That means that the game board/cards/dice have text that’s actually written in Spanish.

Some of the games have absolutely no written language as part of the game (Think “Uno!” or “Dominos”) but come with directions in Spanish or lend themselves to lots of conversation that promotes Spanish language development.

We have all of these games in our home and we love every single one of them! Most of them were my daughter’s first board games. All of these games have no written language associated with them, meaning that they are solely based on pictures. The directions for most of them come in Spanish and are easy to use to work on basic Spanish language and concept skills.

This post contains affiliate links. If you click an affiliate link and make a purchase, I earn a small commission which supports this blog at no additional cost to you. Please see the Privacy Policy for details. Thank you for supporting me!

Here is the version that we have. The directions come in Spanish, too!

This was my daughter’s first board game and is the most simple of these games. It’s an engaging game that works on color recognition and fine motor skills – perfect for toddlers! Spin the spinner to see which color acorn you need to pick from the tree using the squirrel tongs and add it your trunk. Watch out for the storm!

This is the version that we have. The picture cards are perfect for working on Spanish vocabulary and repetitive phrases.

This is another great game for young children. The board is actually 6 feet long (so cool!) and it comes with super cute magnifying glasses that you use to search for different images hidden throughout town. When my daughter was first learning to play we wouldn’t use the timer since it would take her so long to find the objects. Now we have to use the timer because she can find so many so quickly. This is a cooperative game, meaning that all of the players are working together to get to the end of the board to stop the pigs from eating all of the picnic food!

“Ves alguna bandera?” (Do you see any flags?)

There are so many versions of Spot-It available. We have the Harry Potter version here, but regardless of version, the game play is the same. Such good Spanish vocabulary practice!

There are a few styles of this game and all of them have the same rules. We happen to have the Harry Potter version, but all the versions work the same. Each set comes with several different mini games that you can play using the spot it! cards. The basic idea is that you need to match one of the pictures on your card to the pictures on the card that is flipped in the center. This fast paced I Spy game is easy to learn and does a great job building Spanish vocabulary.

Another classic card game that’s perfect for working on numbers and colors in Spanish! We also have the Harry Potter version of this one 🙂

This classic game is perfect for working on colors and numbers in Spanish. Like with Spot it!,we actually have the Harry Potter version of this game, so it’s a little different, but the idea and some of the common phrases are the same. Players try and get rid of all of their cards by matching their color or number to the card in the center. When my daughter was first learning to play, we would show each other our hands. That way I could make sure that she wasn’t missing moves and I could help her to learn some basic strategy.

“Tengo un comodin!” (I have a wildcard!)

Yes, we have the Harry Potter version of this one, too – no judging! This is great for working on Spanish descriptors and questioning.

This is probably the best game you can get to help younger children learn how to ask questions in Spanish. Each player picks a person card at random. Each turn they try and guess which card the other player has by asking them a yes or no question. As with so many of the games in our home, we also have the Harry Potter version of this game!

“Tu persona es una mujer?” (Is your person a woman?)

We have this version here. My daughter learned this game when she was 3 years old and continues to enjoy it. Great for Spanish animal vocabulary!

Like the adult version of the game, Sequence for kids is about getting four chips in a row before someone blocks you. This version uses animal cards (mostly zoo animals). Players play a card and put a chip in that spot on the board. Each player tries to get 4 in a row while the others can block them. As with Uno!, we started off playing by showing each other our hands so that my daughter could understand how to play and learn some strategy.

Our Loteria set is from Scholastic but here are some that look really similar to ours! Love that the directions and print on the cards are in Spanish.

Loteria is a common Mexican style bingo game that has several variations. We have a small and basic set from Scholastic Book Clubs that I bought for my daughter when she was 3. Each player gets a board with various animal pictures on it. The caller calls out a card and each player looks to see if they have it on their board. The first person to fill up their card and yell, “Loteria!” wins the game. You can get sets with really beautifully illustrated cards and most of the versions have the name of the animal in Spanish on each card.

Tienes un buho en tu carton? (Do you have an owl on your board?)

Tu carton esta llena! (Your board is full!)

Here is the animal set that we have which is perfect for beginning players working on basic language vocabulary.

Dominos is a classic game and, depending on the set that you get, it can really work on your child’s language skills. Dominos is a simple game of matching one of your pictures to the picture that is in play. You can get dominos that use numbers or pictures and that have a variety of patterns and colors. My daughter got her first set when she was 2 years old and it was an animal set, which was great for working on her animal vocabulary in Spanish. We also have a beautiful number set from my grandmother which goes up to 12 and works well with number words.

Tienes un leon que puedas usar? (Do you have a lion that you can use?)

Tienes una pareja? (Do you have a match?)

Here is the version that we have. We started playing this when my daughter was 3!

I hadn’t heard of this game until a family member recommended it for my daughter when she was three years old. The game play is a littlpve different than most traditional board games since it is a cooperative game – everyone wins or everyone loses. (This was a great feature when my daughter was little and hated to lose!) Players pick “path” pieces and try to build a connecting path through the forest to get to the other side, without getting blocked by the dragons. The game brings up great conversations about strategy/critical thinking and also works on graphing skills.

“Puedes girar esa pieza?” (Can you turn that piece?)

“Como podemos evitar el dragon?” (How can we avoid the dragon?”

“Como puedo conectar esta pieza? (How can I connect this piece?)

Love this one! We learned so much Spanish vocabulary from playing this game and the directions come in Spanish so they are a great reference tool for non-native speakers like me.

This is one of our all time favorite games! You can play it with varying degrees of strategy and math, so you don’t have to worry about your child being too young to solve math problems. There are so many opportunities for Spanish language learning here! Players use their King cards to wake up the Sleeping Queens and create addition equations with their number cards to get new cards! We learned so much basic math vocabulary in Spanish and my daughter’s ability to work with numbers vastly improved after we started playing this game.

“Tienes una ecuacion!” (You have an equation!)

“Voy a despertar a una reina dormiente.” (I am going to wake up a sleeping queen.)

For some other great Spanish board game recommendations, check out these articles here:

10 Spanish Games And Board Games For Kids

I’m always on the look out for new and fun board games. If you have any recommendations or have any good Spanish board games, let me know about them in the comments!

Don’t forget to subscribe here so you can get my latest posts and resources delivered directly to your inbox!

18 thoughts on “10 Spanish Board Games For Kids” We’re all about these frog books right now becau